The Museum is also open by appointment for groups and individuals. 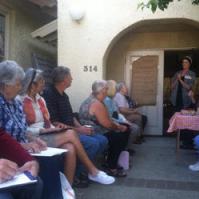 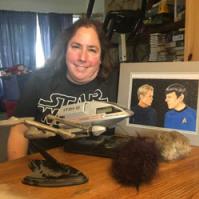 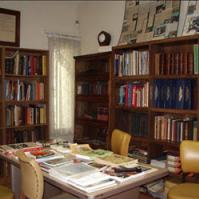 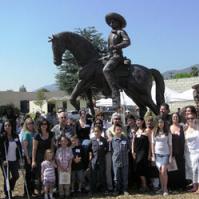 Although the Least Bells Vireo, an endangered bird species which once populated the river bed area on Duarte eastern border. was not seen, it was heard singing during the April 19 bird walk. Ornithologist Kimball Garrett, collections manager at the L.A. County Museum of Natural History, and other participants, found many species of birds along the San Gabriel River just across the street from the Museum and in Encanto Park. Participants met at 8 a.m. at the Duarte Historical Museum.
Click here for Bird Walk pictures from April 19, 2009

The Society was formed in 1951 to record and illustrate the history of Duarte and nearby areas as a California rancho, a settlement, and most recently as a city. It is entirely an unpaid, privately-funded, non-profit organization supported by membership dues, a small endowment, and contributions. The Society is governed by an executive board of volunteers.

Activities of the Society include operation of the Duarte Historical Museum, craft and art fairs, educational interaction with local schools and the library, and bird walks in the adjacent course of the San Gabriel River. The Society publishes a newsletter, the Branding Iron, participates in the work of the Foothill Curators and publishes their brochure "Locations and Operating Hours of the Historical Museums of the San Gabriel Valley". Bimonthly programs open to the public are held in the Museum.

The main activity of the Society is the Duarte Historical Museum, located at 777 Encanto Parkway, Duarte, California. The museum is staffed by docents who open for the public on the first and third Wednesdays of each month, from 1 to 3 pm, and from 1 to 4 pm on Saturdays. The Museum is also open by appointment for groups and individuals. It is closed Saturdays on holiday weekends.

The City is named for Andres Duarte, a Mexican soldier who obtained a land grant in the waning days of Mexican ownership of Alta California. Duarte ranched his grant well into the period of statehood for California but lost it in the 1860's. Duarte is now a residential community with a business sector, and is a City established in 1957. For more on Andres Duarte and his activities, see our separate page on Duarte History.

Andres Duarte's Brand, registered in 1843. It is used in the City's seal and flag, and is reproduced on the hills overlooking the City.

The Statue Project: Duarte in Bronze

Our major recent project has been to erect a large bronze equestrian statue, with Andres Duarte riding. The sculpture is installed in a new plaza -- "Plaza Duarte" -- located just north of City Hall. This is the largest public-art project in the San Gabriel Valley, and we expect the statue to become an icon for the City of Duarte. The dedication ceremony for the statue took place on March 31, 2007 with many descendents of Andres Duarte attending.

Here are further links to information about this project:

Duarte in Bronze -- View details of the program and the sculpture.

Statue to be in New Civic Plaza -- Read the mid-September 2006 press release about plans for installing the statue in the new civic plaza.

Invitation to Dedication -- View and download the invitation to the public unveiling ceremony at our main website.

Foundry Work -- See work at the foundry in creating the full-sized statue.